Regrets on the freedom financial road

When contemplating the road traveled and the now value of my Portfolio, I can't believe how relatively easy it was to build that stack of money.

We read about it over and over, but it's true : you can build wealth with a relatively small income.

And one thing is absolutely certain: the sooner you start, the faster your money will grow.

Compounding interest is not magic ocus-pocus formula. It's a reality.

Start young, invest on a regular basis and time will do the rest (that and a few strong bull market).

We also read a lot about people regretting not investing earlier. I get that too. But why bother : what's done is done. You can only make up the time you lost.

I often tell myself that I could of done much better if I had only did this and that... Well I didn't.

Fact is, at the time, the things I was doing with my money were the things I thought appropriate to be doing. That's all.

Eating out, traveling, spending dough on useless crap... Those were the thing to do back then.

I still have to tap on my shoulder and congratule myself for having the presence of mind to invest small amount of money in those expensive mutual funds from 2000 to 2007.

That money wasn't working hard, but thankfully it wasn't spent for nothing.

I'm so glad that I got to know what I know now. Otherwise, I wouldn't have taken the steps to engage on this road to be financially independent.

So, all in all, no regrets. Just happy to be where I am now.

I guess the chart below pretty much sums up where I am coming from (and where I intend to go).

It's never too late to do good things, people say. I guess there's some truth to it.

And you, do you have any financial regrets? How did you overcome them? 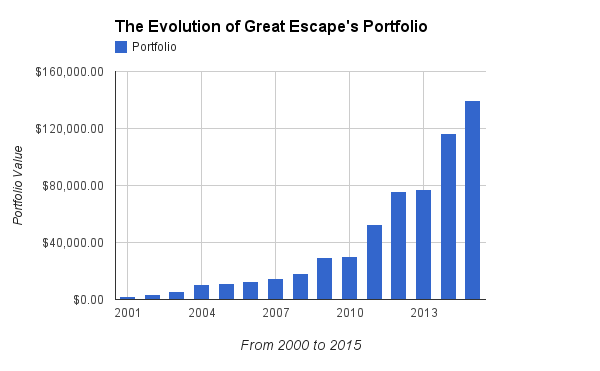 * Notice things haven't changed much between 2011 and 2012. It's because I bought a house. Therefore I wasn't able to invest as much as I would have liked to. But hey! it's an investment, right?