Power Corp (POW) : one of my 4 main holdings

It wasn't meant like that -- although I like to think it was -- but like Warren Buffet a good chunk of my portfolio consists of only four major holdings.

Roughly 50% of all my dividends come from these four stocks :

Now I know most of you guys, especially our American friends, know about blue chip companies such as Johnson and Johnson (JNJ). Heck, I don't think I ever came across a fellow blogger/investor who hadn't this giant in its portfolio. I can't blame them. JNJ accounts form more than 10% of mine. JNJ and I are in it for the long haul.

Royal Bank of Canada (RY) and Suncor (SU), which trade in both Canada and US stock exchange, are also popular holdings among our little community (and beyond).

Even Warren Buffet is a fellow shareholder of Suncor. That's right, you read it here folks. He holds more than 20 millions shares of this energy stock. Actually he just added 20% more to its actual holdings. It represents 0.65% of its portfolio, so just a tiny more than Verizon. Not bad. Check it out here.

But when it comes down to popularity, I guess it's a whole different story with Power Corporation of Canada (POW), the "Ringo Starr" of my 4 main holdings.

A very few fellow bloggers/investors actually own POW or its twin brother Power Financial (PWF). Granted, the fact that POW is not trading in the US might be a reason why it's less popular among fellow bloggers. But why is it among fellow Canadian bloggers? I ask you.

It's not a popular pick and it's hard to understand because it's a company that's been highly praised for decades now. Actually, it's been a long time favorite of Money Sense and remains one to this date.

POW is the all-around conglomerate. It's been said in the past that Power Corp is the Berkshire Hathaway of the North. There's some truth to that. This is a very cautious and very low-key company.

It's a well diversified one too. 12% of its business is done in the United States. Have you heard of Putnam Investments? 30% in Europe. Through Pargesa, POW holds significant positions in large companies based in Europe, such as Pernod Ricard and Total.

In Canada, with franchises such as Great-West, Investors Group, Mackenzie Investments, Power Corp serves 1 out of 3 people. Canada accounts to more than 58% of its business. 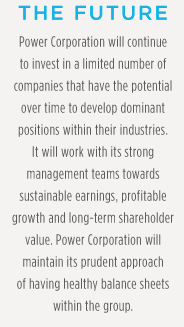 It really beats me that I don't see more Canadian investors actually holding this stock. . I know Power Corp hasn't raised its dividend since 2008 (*Power Financial just raised it today and POW will probably follow) but at roughly 4%, they actual dividend yield is very much acceptable. Dividend investors, think about it, Power Corp has the same investing philosophy as you do :

I'm not going to crunch numbers about the company, I will let this snapshot give you an idea of those. But I'm pretty sure that you now understand better why POW (and PWF) will remain among my top holdings for years to come.

Full disclosure : I am long POW and PWF. 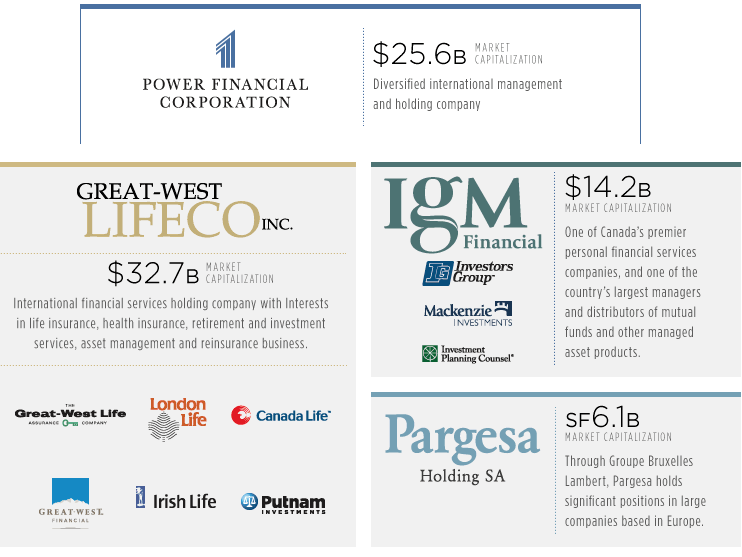