Needless to say, this stock is lagging a little bit in terms of its dividend, which hasn't been increased since 2012 and is now yielding under 1%. That's very low and unusual for a Dividend Investor like me. It's also a reason why a lot of investors (especially in the bloggers community) have shy away from this particular stock.

But they shouldn't! There are many reasons why this stock weights more than 5% in my portfolio.

The low yield is mostly due to the share going up drastically since the arrival of activist investor Bill Hackman and new CEO Hunter Harrison. It went as high as 250$ (and more). Currently, since the beginning of the year, it took a 30% drop... 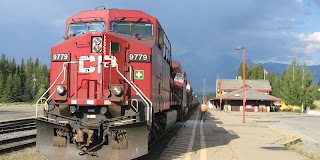 I originally bought the stock in 2011 around 56$... I bought 100 shares back then. It just gives you an idea how much the share price has rocketed over the last few years.

At the time, the dividend yield was pretty much the same as its competitor Canadian National Railway (CNR). It's not the same anymore obviously. CNR has been increasing its dividend, while CP hasn't and its share has gone up the ceiling.

Right now, CP is still focusing on its merger with Norfolk. One has to presume it is keeping its cashflow for this purpose (although they have had a strong shares buyback policy as of late).

I'm confident in the capabilities of its CEO to create wealth for the CP shareholders in the future. He has done so with CNR and is currently putting CP in a good spot to replicate his past success.

Are you an investor-fan of trains? If so, do you hold CP or CNR?